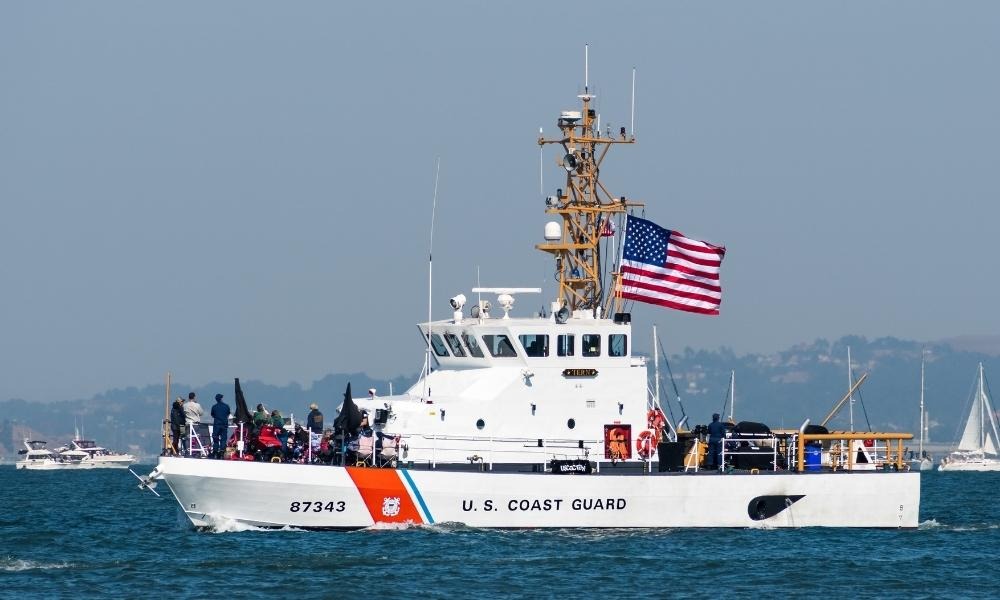 On August 4, 2022, the US Coast Guard will celebrate its 232nd birthday. One of the oldest of the United States’ military branches, the Coast Guard serves as both a federal law enforcement agency and a military force, defending and protecting the nation in peacetime and war. While Armed Forces Day  honors all of the United States’ military branches, the US Coast Guard commemorates its birthday each year on August 4, the only branch to have an individual holiday to celebrate their accomplishments!

Read on to learn more about the Coast Guard, its history, and how you can celebrate National Coast Guard Day!

What is the US Coast Guard?

The Coast Guard during peacetime

The Coast Guard during peacetime acts as a federal law enforcement agency under the Department of Homeland Security. The Coast Guard defends more than 100,000 miles of US coastline and inland waterways and safeguards the 4.5 million square miles that encompass the US Exclusive Economic Zone (EEZ), which stretches from North of the Arctic Circle all the way to South of the equator, including nine different time zones.

The Coast Guard also acts a first-responder organization for humanitarian relief, providing aid to those in need during emergencies. After the attacks on September 11, 2001, the Coast Guard facilitated the evacuation of more than 500,000 people from New York City. In the wake of the destruction of Hurricane Katrina in 2005, the Coast Guard’s operations saved more than 30,000 people who had been left in dangerous situations. The Coast Guard also responded to the devastating hurricane season in 2017 with Hurricanes Harvey, Irma, and Maria. But the Coast Guard responds to emergencies on a daily basis as well, conducting an average of 45 search and rescue operations, saving an average of 10 lives, and saving over $1.2 million in property every day.

The Coast Guard also operates the International Ice Patrol, which maintains surveillance of icebergs in the North Atlantic.

The Coast Guard during wartime

History of the US Coast Guard

The US Coast Guard was founded on August 4, 1790, by Treasury Secretary Alexander Hamilton. Hamilton authorized the construction of ten vessels known as Revenue Service Cutters, which were used to enforce the nation’s first tariff laws. The Navy that had been formed to fight in the Revolutionary War disbanded in 1785 and would not reform until 1794, thus for the first four years of its existence the Revenue Cutter Service was the United States’ only armed force at sea and remains the oldest continuous seagoing service.

The name of the Revenue Cutter Service was changed to “Coast Guard” when President Woodrow Wilson signed a law that combined it with the United States Life-Saving Service in 1915. The Life-Saving Service was a federal agency that was responsible for rescuing shipwrecked mariners and passengers. More mergers were to follow with the Lighthouse Service joining the Coast Guard in 1939 (responsible for lighthouse maintenance), and the Bureau of Navigation and Steamboat Inspection in 1946 (enforced laws related to merchant vessels).

The US Coast Guard has played a vital role in nearly every war the US has been involved in. During World War II the Coast Guard transported troops and manned amphibious-style assault craft, as well as small craft that brought in reinforcements and supplies. During the Vietnam War the Coast Guard deployed a special regiment, known as Squadron One, which patrolled the coastlines of Vietnam. The Coast Guard also supported efforts during the War on Terror, both domestically and on foreign land.

How to Celebrate the US Coast Guard’s Birthday

National Coast Guard Day is the only holiday for a branch of the military that is separate from Armed Forces Day. Originally celebrating individual holidays, the other branches of the military were all consolidated into one day, but the Coast Guard celebrates on both Armed Forces Day, and on its birthday. The Coast Guard’s birthday is generally an internal celebration, with activities to commemorate the holiday organized by individual commands or units.

The Coast Guard Festival in Grand Haven is the largest community celebration of a branch of the Armed Forces in the United States! They have been commemorating National Coast Guard Day every year since 1924, and the festivities have only expanded over time. The city welcomes a mix of Coast Guard servicemembers and their families, residents, visitors, and local and state dignitaries. Events include parades, memorials, picnics, a carnival, fireworks, a car show, craft fair, and far more! There are lighthouse, beach, and ship tours, and the waterfront stadium hosts musical acts and a water ski show!

If you’re not able to visit Grand Haven for the Coast Guard’s Birthday, there are plenty of other ways you can celebrate and honor those who serve. Here are a few ideas:

The US Coast Guard’s motto is “Semper Paratus” which means “Always Ready” in Latin. It’s clear from the wide variety of tasks and responsibilities that fall under the Coast Guard’s jurisdiction that their motto is incredibly apt. From enforcing laws and regulations, to protecting the environment, to responding to emergencies, and assisting the Navy when called upon, the Coast Guard really does it all-- and we thank them for their service!

Like the US Coast Guard, our tactical boots are also Always Ready! Designed specifically for those who serve in the Armed Forces, our boots will withstand demanding field conditions without compromising on comfort. Whether you’re looking for a pair of boots to keep your feet warm and dry in wet conditions, a pair to increase your speed and agility, or simply a dependable pair for everyday life, our Tactical Collection has exactly what you need!